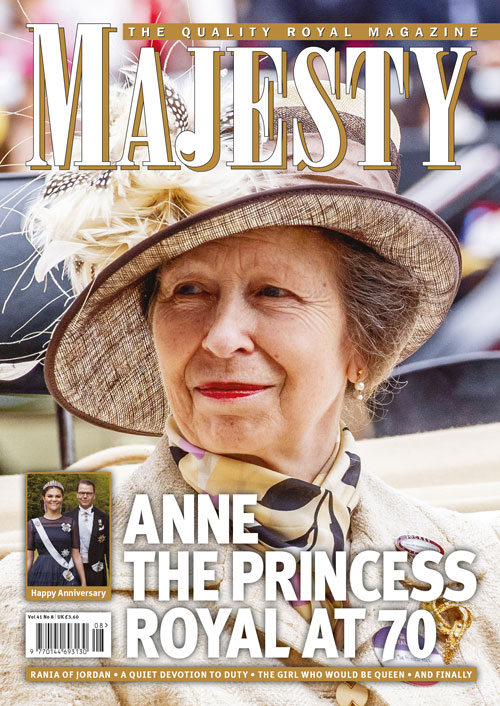 August 2020
Vol 41 No 8
The indefatigable Princess Royal at 70; Queen Rania of Jordan at 50; the underestimated Mary, Princess Royal and Countess of Harewood; Napoléon I and his vision for Paris.
BUY PRINT BUY DIGITAL
Subscribe &
never miss an issue
All the latest royal news from around the world delivered direct to your home or your digital device every month.
SEE THE BENEFITS
Ingrid Seward
Editor-in-Chief of Majesty Magazine
Ingrid is acknowledged as one of the pre-eminent writers and commentators on the royal family and has published over 15 books and contributed numerous articles to publications worldwide. Ingrid is in the unique position of knowing many members of the royal family personally and through Majesty enjoys a special relationship with the Royal Household.
Letter from the Editor

It is hard to believe it is 70 years since the birth of the Princess Royal. The world has changed far more than anyone could have imagined since then, but Anne has refined the art of keeping up with the times. She refuses to be shocked by anything and has adapted to the circumstances surrounding her, whether it be a royal palace or a hut in a fly-blown desert while representing Save the Children.

During lockdown Anne perfected her Zoom and video call technique and went on to record the final chapter of Thomas and the Royal Engine to benefit an STC fundraising initiative. She read the book superbly – including the voice of the Queen who appears in the story – and revealed Thomas’s adventures had been among her childhood favourites.

The Duchess of Cornwall says she has not done so well in keeping up with the times – until now. She admits she hated the internet until lockdown came along, when she realised what an invaluable tool it is, not only to keep up with her friends and her grandchildren, but her patronages too.

Camilla was speaking on BBC Radio 5 Live in her deep-voiced, slightly self-deprecating way. During lockdown she has endeared herself to a new audience of online listeners and supported her many charitable causes, always with something uplifting and amusing to say. No wonder she has proved to be such a tonic to the Prince of Wales, who by his own admission used to look at the gloomier side of life.

Prince Charles may well have felt gloomy if he saw that some sections of the media objected strongly to his younger son’s recent online discussion about the future of the Commonwealth. The Duke and Duchess of Sussex have joined Harry Walker, a top US public-speaking agency, which will enable them to earn top dollar for talking about their favourite topics. In a video-link conversation with young leaders from the Queen’s Commonwealth Trust, Harry and Meghan talked of how inequalities and injustices of the past must be acknowledged, however ‘uncomfortable’ that process might be. Despite some taking offence at Harry’s opinions, others welcomed the opportunity for meaningful discussion at a time when many aspects of society throughout the world are being addressed. I suspect that Harry’s close relationship with his grandmother will not suffer.

Although Los Angeles is still in lockdown, Charles is hoping to be able to see the Sussexes and both sets of grandchildren this summer, though probably not together, when he and the Duchess of Cornwall are able to have them to stay at Birkhall.

Most of the royal residences have reopened to the public and hopefully the Queen will be able to enjoy her summer holiday as usual at Balmoral with her family, subject to the prevailing social-distancing requirements, of course.

It will not be quite as usual, but all of Her Majesty’s personal staff are being tested for Covid-19 and every possible precaution is being taken to ensure they comply with government guidelines. The monarch has to set an example, but she must have longed for a change of scene from the ancient stone walls of Windsor Castle to the highland beauty of Balmoral, where she has spent almost every summer apart from the wartime years of her childhood.

To mark the Queen of Jordan’s 50th birthday, Coryne Hall assesses the impact she has had on her adopted nation

A QUIET DEVOTION TO DUTY:

Mary, Princess Royal and Countess of Harewood, was rather underestimated in her day, says Elisabeth Basford

Royal life continues to evolve in unexpected ways while the coronavirus pandemic remains with us, by Victoria Murphy

A milestone year for the no-nonsense Princess Royal, acknowledged in the appropriate manner by Christopher Warwick

We have Napoléon I to thank for many of the landmarks that make Paris so beautiful, as Trond Norén Isaksen explains

Princess Anne, though not particularly maternal, has proved to be an exemplary mother, by Ingrid Seward

THE GIRL WHO WOULD BE QUEEN:

When it came to a prospective husband, eligible Princess Ingrid of Sweden set her sights extremely high