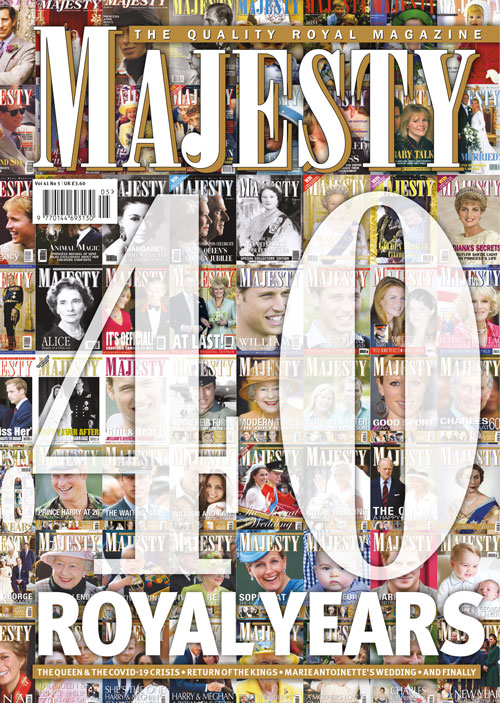 May 2020
Vol 41 No 5
The Queen and her family react to the Covid-19 crisis; Majesty celebrates 40 years of publishing; Princess Christina of Sweden on the grandmother she never knew.
BUY PRINT BUY DIGITAL
Subscribe &
never miss an issue
All the latest royal news from around the world delivered direct to your home or your digital device every month.
SEE THE BENEFITS
Ingrid Seward
Editor-in-Chief of Majesty Magazine
Ingrid is acknowledged as one of the pre-eminent writers and commentators on the royal family and has published over 15 books and contributed numerous articles to publications worldwide. Ingrid is in the unique position of knowing many members of the royal family personally and through Majesty enjoys a special relationship with the Royal Household.
Letter from the Editor

Welcome to our 40th anniversary issue. In these strange and challenging times, I am especially proud that our specialist magazine is surviving and that so many of you continue to enjoy it. Our first issue in May 1980 featured the then bachelor Prince of Wales on the cover, with a price of 60 pence. It was the first magazine of its kind and long before any competition.

I joined the team in late 1983 and the following year travelled on my first royal tour as part of the press pack for the Queen and Prince Philip’s state visit to the Hashemite Kingdom of Jordan. The most exciting thing was going out in King Hussein’s speedboat around the bay of Aqaba; the most memorable was an unforgettable few hours inside the ancient city of Petra.

Joe Little’s by-line first appeared in the magazine in 1992 and he joined the team full-time in 1997. Two years later he became managing editor, around the time Prince Edward was granted the title Earl of Wessex on the day of his marriage to Sophie Rhys-Jones. That same year, on 31 December, the Queen officially opened the Millennium Dome at Greenwich.

Last month, shortly before her 94th birthday, Her Majesty made an historic address to rally the nation’s spirits during the coronavirus crisis. Apart from her Christmas broadcasts it was only the fifth time she has used a televised format to speak directly to her peoples. In an echo of the Vera Lynn song that became a beacon of hope during the Second World War, she said that although isolation might mean ‘painful’ separation from families and friends, ‘we will meet again’.

It was a speech of emotion, reflection and dignity and revealed her pride in her subjects’ resilience in the face of adversity. It was not an address of platitudes drafted by her government, but instead, helped by her private secretary Sir Edward Young, it gave her licence, albeit a small one, to express her personal feelings.

Having recovered from a mild attack of the coronavirus, the Prince of Wales has been involved in video links from Birkhall. His dulcet tones have been reassuring and his message heartfelt as he lifted the spirits of the nation. He also opened the 4,000-bed NHS Nightingale Hospital in east London while sitting in his study in distant Aberdeenshire. ‘The wonders of modern technology can only do so much – and I can’t quite reach,’ he said before asking the head of nursing to unveil the plaque on his behalf.

How sad he must feel that Prince Harry has completely distanced himself by moving from the safety of Vancouver Island to bustling Los Angeles. The Prince is still financing his younger son and daughter-in-law, and in the current climate of uncertainty the couple look unlikely to get much work.

Love them or loathe them, the Sussexes still command huge interest and when Archie celebrates his first birthday on 6 May no doubt he will be the recipient of many gifts and good wishes from both sides of the Atlantic.

The Queen and her family do their bit in recognition of the remarkable feats of carers and keyworkers, by Victoria Murphy

The story of Queen Wilhelmina of the Netherlands’ hurried departure from her homeland, recounted by Robert Prentice

As Majesty reaches yet another milestone, Ingrid Seward looks back at the magazine’s 40 years of publishing

RETURN OF THE KINGS:

The Queen and members of her family gather in Westminster Abbey for a 54-nation observance, by Joe Little