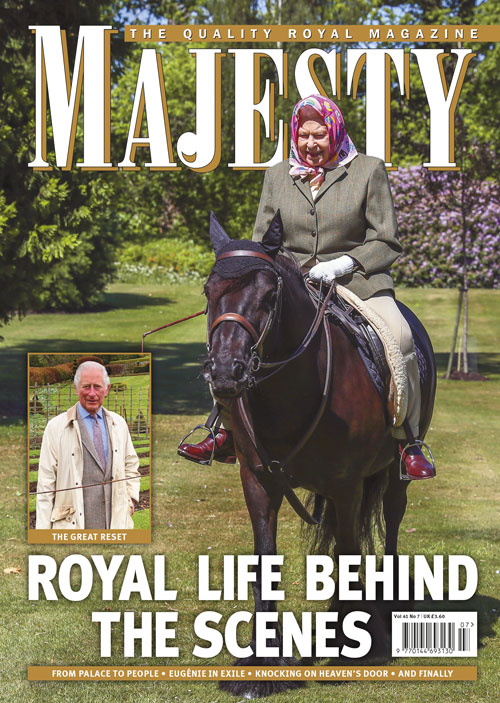 July 2020
Vol 41 No 7
The Queen fulfils her role as head of state from the relative safety of Windsor Castle; VE-Day 75th anniversary commemorations; the Dutch princes who came to Britain in search of a bride.
BUY PRINT BUY DIGITAL
Subscribe &
never miss an issue
All the latest royal news from around the world delivered direct to your home or your digital device every month.
SEE THE BENEFITS
Ingrid Seward
Editor-in-Chief of Majesty Magazine
Ingrid is acknowledged as one of the pre-eminent writers and commentators on the royal family and has published over 15 books and contributed numerous articles to publications worldwide. Ingrid is in the unique position of knowing many members of the royal family personally and through Majesty enjoys a special relationship with the Royal Household.
Letter from the Editor

It is fortunate that the Queen has the kind of character that enables her to deal with problems calmly and in her own way. 2020 has been an extremely difficult year for everyone and she is no exception. The departure of the Duke of Sussex with his wife and child to North America was a cause of immense sadness to her and Prince Philip and they have not seen great-grandson Archie since 2019.

The Queen, by dint of who she is, has to emotionally stand alone, now more so than ever. Nobody except her husband and children can be quite themselves when they are with her and even her sons and daughter have to bow or curtsey when they greet her. Fortunately, the formality is inbred and they hardly notice. The Princess Royal once said that when her mother called her on the telephone she found herself standing up automatically, even though she was in her own home.

Years ago, Sarah, Duchess of York told me that she and Prince Andrew had the greatest difficulty in discussing the issue of their failing marriage with the Queen. When they approached her with their problems, she always found an excuse to do something else or walk the dogs.

The Duke of York seems to have a way of persuading his mother to do what he wants when he wants, but his association with the late Jeffrey Epstein and the inevitable debacle that followed his disastrous Newsnight interview is something she cannot be involved with. The Queen will help Andrew whenever she can and recently agreed to keep his security team intact despite the suggestion that they were not needed as he no longer carries out official engagements. But in the case of his previous friendship with Epstein there is little she can do except, as any mother would, believe what he has told her is true.

The US Department of Justice wants the Duke of York to answer questions face to face and has accused him of avoiding the issue and providing ‘zero co-operation’. This is inaccurate, as Andrew’s lawyers say he has offered three times to assist as a witness but would prefer to answer questions in writing. But it seems the DoJ wants to question him under oath in court.

Massive legal bills are being run up on both sides and nothing has been agreed. It is out of the Queen’s hands, but she must be unhappy that her son’s life is collapsing around him. The Prince Andrew Charitable Trust is having to be wound up because of financial mismanagement; the Swiss chalet he and his ex-wife bought in Verbier is having to be sold to clear an outstanding loan and so it goes on.

At least the Duke of York has the unerring loyalty of Sarah, who lives at Royal Lodge, and of course that of their daughters, Princess Beatrice, who is now to be married next year, and Princess Eugenie, who will celebrate her second wedding anniversary in October.

This Issue's Features
THE NEW NORMAL:

Life may have changed because of the pandemic but members of the royal family remain visible, says Victoria Murphy

The hopeful Dutch princes who travelled to Britain in the 1800s in search of a bride, by Coryne Hall

NEVER GIVE UP, NEVER DESPAIR:

The 75th anniversary of VE-Day is marked in a very different way but nevertheless is a great success, by Joe Little

FROM PALACE TO PEOPLE:

The Queen, pragmatic as ever, continues to fulfil her role as head of state from the relative safety of Windsor Castle

The last Empress of the French died 100 years ago this month, having spent half a century in southern England

SPECIAL IN MY MEMORY:

The Imperial Crypt in central Vienna, remarkable final resting place of 147 members of the Habsburg dynasty