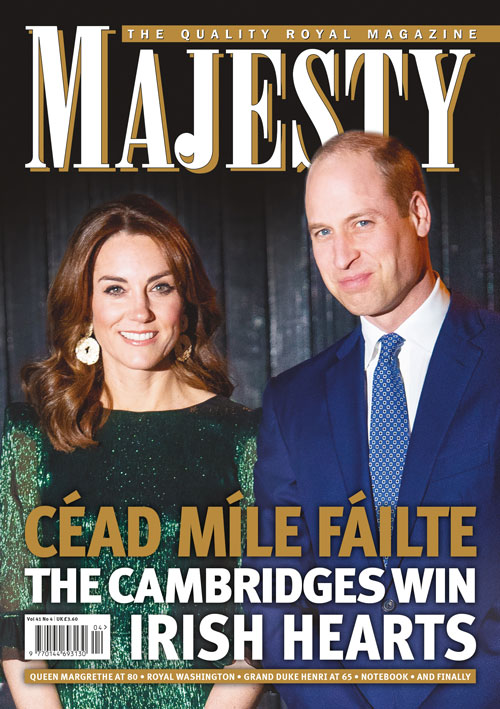 April 2020
Vol 41 No 4
The Duke and Duchess of Cambridge’s historic visit to Ireland; Queen Margrethe of Denmark at 80; Franklin D. Roosevelt welcomes kings and queens displaced by war.
BUY PRINT BUY DIGITAL
Subscribe &
never miss an issue
All the latest royal news from around the world delivered direct to your home or your digital device every month.
SEE THE BENEFITS
Ingrid Seward
Editor-in-Chief of Majesty Magazine
Ingrid is acknowledged as one of the pre-eminent writers and commentators on the royal family and has published over 15 books and contributed numerous articles to publications worldwide. Ingrid is in the unique position of knowing many members of the royal family personally and through Majesty enjoys a special relationship with the Royal Household.
Letter from the Editor

As the Queen celebrates her 94th birthday on 21 April she might well be feeling her age. It has not been an easy year for her so far. Saddened by the Duke and Duchess of Sussex’s attitude to her insistence that their ‘Sussex Royal’ brand had to go, there was further conflict during their tussle over the rights to the word ‘royal’. Harry and Meghan complained on their website that there was one set of rules for them and another for the rest of the royal family; they are right, but they are the ones who have chosen to live and work outside the royal domain.

Her Majesty knows that the Duke will find the move from royalty to non-royalty difficult and that it will involve a lot more than asking to be called simply ‘Harry’. I think the Queen would like nothing more than for them to change their minds and return to the royal fold; then she would have her great-grandson Archie down the road and be able to keep an eye on Harry. She had lunch with him at Windsor Castle during his recent visit and no doubt they discussed his future plans. She had high hopes for Harry and Meghan and the things they wanted to do in her name, particularly with the Commonwealth.

The beginning of March saw their final round of engagements, all of which drew a huge amount of media attention, but I suspect even their sternest critics will be sad to see them go as life will be duller without them. We hoped they would always be there, doing endless rounds of good works and saying the right things. This is how the Duke and Duchess of Sussex began their married life almost two years ago, but for many reasons it was not to be.

One thing the Sussexes still need is some form of protection. If taken from the private sector the bodyguards will have no access to government information and they can’t carry firearms. Perhaps having five protection officers from the Royalty and Specialist Protection branch, as Harry did when he travelled to Edinburgh last month, is not necessary, but the Duke is a global target not least because he served in Afghanistan. Meghan is also a potential victim and most of all little Archie is a prime target for a kidnap attempt.

Like their British counterparts, the Mounties had been helping to look after the Sussex family, financed by the Canadian taxpayer; now that Harry and Meghan are no longer working royals their services are being withdrawn.

It is a very sensitive issue. All former American presidents and British prime ministers have 24-hour protection, but when those prime ministers earn monies from speaking engagements they are expected to contribute to the cost themselves. The Royalty and Specialist Protection branch is expensive and the cost of round-the-clock protection for the Duke and Duchess while living and working in North America will make the £2.4 million spent on Frogmore Cottage look like chicken feed.

There has to be a solution and hopefully the British government will come up with one. It could be that the Queen or the Prince of Wales will have to finance part of it themselves.

This Issue's Features
SEPARATE LIVES: We’ve covered many royal weddings and alas divorces too, says Ingrid Seward as two more are announced
ROYAL WASHINGTON: Franklin D. Roosevelt rolled out the red carpet for kings and queens dislodged by war, as Trond Norén Isaksen explains
SCHLOSS LANGENBURG: Susan Symons is enchanted by a 13th-century castle in the Hohenlohe region of southern Germany
STAGING HISTORY: Trond Norén Isaksen on how Queen Margrethe of Denmark has successfully blended tradition and modernity
WHEN IRISH EYES ARE SMILING: The Duke and Duchess of Cambridge’s historic visit to Ireland, as witnessed by Victoria Murphy
NOTEBOOK:

Hampton Court Palace is the venue for a dazzling new exhibition – Gold and Glory: Henry VIII and the French King

Coryne Hall marks the 65th birthday of Grand Duke Henri of Luxembourg, whose family has had a bumpy ride of late